Angkor Wat: a famous place for visitors around the world 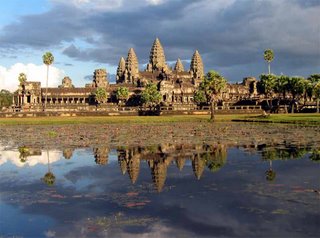 There are many places and options for all visitors on how to relax their mind from the stressful conditions. Someone choose to visit a natural beauty, a modern city or extraordinary ritual event; while someone choose to breathe with the ancient piles of stone and world's wonder heritage. Personally, I would like to visit Angkor Wat Temple which is the oldest one of ancient ruins of Cambodia, decorated by beautiful sculptures and the sense of pride and hope for Cambodians.

Angkor Wat Temple is one of the world's ancient largest monuments are made by sandstone located in Cambodia. It was built by King 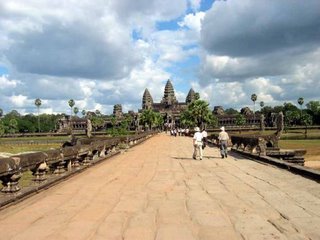 Suriyavarman II(1113-1150) in the city called Yasodharapura(city of Isvara Linga). This city was primarily created by the King Yasovarman who moved from Hariharalaya city far east about 10 km. of Angkor Wat. There are many ruins scattering in this new city. But Angkor Wat is considered as the largest and most beautiful one. It seems erected in the middle of administrative area which can be considered as the heart of the emperor kingdom. Actually, there are many ancient ruins in Cambodia but Angkor Wat is recognized as the most powerful and strongest one. During that time, there were only two rival kingdoms comparable with Cambodia kingdom; eastern Champa state and northern Mon state. So we can say that Angkor Wat Temple was the 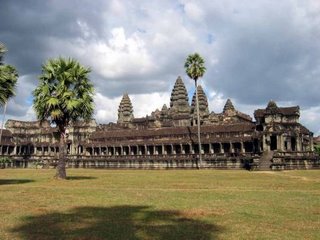 only one largest temple and strongest power in the region of South East Asia before the emergence of Siam and Dai Viet(presently Thailand and Vietnam). This is what I said it is the oldest one among Cambodia's ancient ruins. 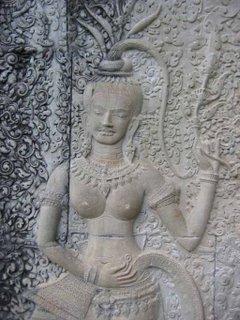 approximately 1,600 Apsara dancers are adorn throughout the monument. But they are very different and having the unique characters. Some are smiling with teeth and tongue, some are dressed with delicate bra and short sarong but some seem have no dress at all. Those are also beautified with different attractive hair-dressed models. Some modern hair-dressed fashion have learned and copied those ancient styles. It is undescribable about the beauty of this sandstone sculptures and base relief, so that why I think it is the most beautiful decoration.

In addition, Angkor Wat Temple offers the sense of pride and hope. It isn't a symbol of humanity's talent and effort, but it is the icon of unity, peace, wisdom and stability of Cambodian people. There are many evolutionary changes of Cambodian ancient ruins development, it had started from the Phnom Da style of art to the highest achievement of Khmer style of art of Angkor Wat. It has been passed for more than one thousand years and left thousand of ruins spreading throughout the region in Cambodia, Thailand, Laos and Vietnam. Through this 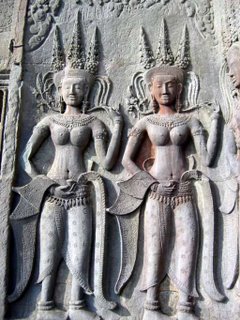 Through the old antique, beautiful decoration and pride of humanity that leads Angkor Wat to be well-known and recognized throughout the world. In the 14th of December 1992, the UNESCO World Heritage Committees declared the monument, and the whole city of Angkor, a World Heritage Site. Especially, Angkor Wat is the seventh wonder of the world with its enormous size, the most beautiful decoration, powerful administration symbol and legacy of human's endeavor. In a time of our life, I suggest that, we have to go and see Angkor Wat like an English writer Arnold Toynbee said "see Angkor Wat and die".

Thank you very much...touch...your comment is valuable...u can make your personal webpage to share information with others for our cyber space friends...thanks

sophan; your writing skills are improving, and your computer skills are obviously very good. I hope to see you soon and will visit this site often.

Thank you very much for your encouragement. I am willing to write more and more essays to improve my English and to disseminate to others who interest in searching Cambodia and Buddhism.

I wish you and family have a great day,