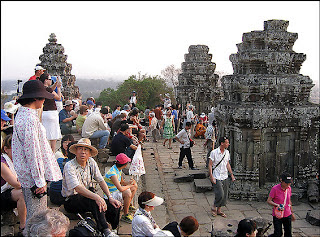 ANGKOR, Cambodia -- Built by a mighty 9th-century Khmer king, the soaring temple of Phnom Bakheng stands atop the highest peak of ancient Angkor. With a sweeping view that takes in Angkor Wat -- the world's largest religious structure -- the monks stationed here were probably among the first to glimpse the approaching Siamese troops that snuffed out this city's centuries-long domination of much of Southeast Asia.

So perhaps it is not surprising that more than 500 years later, Phnom Bakheng has become the ideal perch from which to watch another assault on Angkor -- by marauding armies of tourists.
As Cambodia has settled into peace and opened to the world, the temples of Angkor have in recent years gone from stone to gold for the national government. This year, a deluge of tour operators is expected to cart in nearly 1 million foreign visitors, a sixfold increase since 2000.
Including Cambodians, the number of visitors to the archaeological park will reach a record 2 million this year and at least 3 million by 2010, according to the U.N. Educational, Scientific and Cultural Organization (UNESCO), which identified Angkor as a World Heritage site in 1992.
The growth has put the Cambodian government in a difficult position, observers say, forcing it to balance the potential to make money against the need for preservation, restoration and study. It is a dilemma familiar to other countries that profit from treasured cultural sites.

The Acropolis in Athens, the Forbidden City in Beijing and the Hagia Sophia area of Istanbul are all experiencing tourism pressures. In Peru, the massive sand lines at Nazca and Palpa have come under threat from encroaching power lines and roving tourists in jeeps. In Nepal's Kathmandu Valley, UNESCO has decried "uncontrolled urban development.

"Preservationists and archaeologists here increasingly fear that the frenzy to commercialize Angkor, now also a hot set location for films such as Angelina Jolie's "Tomb Raider," is winning out over the need for preservation.

Nowhere is that clearer than at Phnom Bakheng, where a number of new guidebooks advise visitors not to miss the sunset from the temple's summit. Tips like that have led to a daily siege by an armada of tour buses around dusk. On a recent afternoon, about 4,000 visitors, speaking Korean, Japanese, Mandarin, English and a host of other languages, scampered to the top of the temple, stepping on pictorial stones and manhandling ancient statues as one lonely guard sat on the sidelines, overwhelmed.

"The problem we're facing is that the pace of visitor growth is accelerating far faster than the ability to manage such huge crowds," said Teruo Jinnai, UNESCO's top official in Cambodia. "There is no doubt that this is beginning to cause damage to the temples and that it has the potential to become much worse if nothing is done.

"Six months ago, the U.S.-based World Monuments Fund, which is doing major restoration work at Phnom Bakheng, was forced to rope off the rapidly deteriorating main stone path leading to the temple area because of a combination of trampling tourists and rain runoff.Inside Phnom Bakheng, statues and carvings in low relief have sustained new damage from tourists. Fresh graffiti have been sprayed alongside sandstone carvings of flying celestial nymphs and Garuda warriors.

On one side of the temple, piles of sandbags placed last year to hold up a retaining wall have been damaged by tourists who have climbed and descended the temple's sides without waiting their turn on a number of steep stone staircases.

"In the 10th century, this was a perfect creation, a structure built with mathematical and religious harmony and where the king and a few of his monks would come to worship," John H. Stubbs, the World Monuments Fund vice president for field projects, said as he surveyed the crowds on the temple summit.

"But now, look at this," he said. "It simply was not built for these thousands of people to be here at once. Tourism is a double-edged sword. We want everyone to appreciate the importance of Angkor's temples, but not like this."The Cambodian government has come under fire over Angkor. Only a few local and foreign businesses appear to be benefiting from the economic boom generated by the ruins, by far Cambodia's largest tourist attraction.

The concession to run the admissions center -- which generates tens of millions of dollars a year that preservationists say is rarely pumped back into the site itself -- was granted to a politically connected company run by a powerful Cambodian businessman. Many of the street vendors who now peddle trinkets inside the park have come from the capital, Phnom Penh, rather than nearby villages.

As a result, the rural province surrounding Angkor remains the third-poorest in Cambodia, despite the opening of a string of five-star hotels and shopping arcades in the nearby town of Siem Reap, according to a study released in 2005 by the Cambodian Development Resource Institute.

"We are doing the best we can under the circumstances," said Chau Sun Kerya, tourism director at APSARA, the Cambodian government body in charge of Angkor. "Do we want to have a better plan for crowd control? Do we want more monitoring of the temples? Of course we do, but we simply don't have the funds to do it quickly.

"But the government has found the means to push forward on initiatives designed to lure even greater numbers to the park. In recent weeks, authorities launched a pilot program with Korean tour operators for a nighttime "sound and light" show at Angkor Wat. There, massive spotlights and electrical cords run along the sides of the main temple, a structure so large that four St. Peter's Basilicas could fit inside its footprint. A Japanese tourism company has been granted rights to hold large, moonlit banquets inside the park grounds at $60 per person.

"Angkor has become a sort of cultural Disneyland," said Khin Po Thai, a longtime Angkor guide and preservation activist. "We are overwhelmed by the crowds we have now, but they are still trying to bring in more and more people. No one ever sees where the money goes. It certainly doesn't go back into preservation.

"Without doubt, Angkor has had its share of good times and bad. The great King Jayavarman II began erecting his capital city here in A.D. 802, founding the Khmer Empire that held sway over what is now Cambodia, as well as much of Thailand, Vietnam and Laos, from the 9th century to the 12th.

At its peak, the city boasted a population of more than 1 million, with part of its cultural importance stemming from a mixed religious influence that resulted in a magnificent diversity of stunningly intricate reliefs. Starting as a Hindu city, Angkor turned to Buddhism in later centuries. Its religious life always included a strong dose of animism as well.

After the city's final fall in the early 15th century, it descended into obscurity. Although glimpsed sporadically by foreign travelers and pilgrims in later years, it regained global attention only in 1864, with the publication of the French explorer Henri Mouhot's book "Travels in Siam, Cambodia and Laos," about his visits to the ruins.

The temples suffered during and after the communist Khmer Rouge era in the 1970s and '80s. But since the early 1990s, a growing campaign has been underway to restore the ruins. The massive preservation effort now involves archaeological teams from at least 12 countries.

"Our goal is to try to prolong the life of this incredible site for as long we possibly can," Stubbs said. "We understand the clear need to have tourists visit the temples, and of course we want them to see this great achievement by mankind. But we also need to understand that the real focus should be keeping them safe."
Posted by Leadership at 2/08/2007 02:33:00 PM