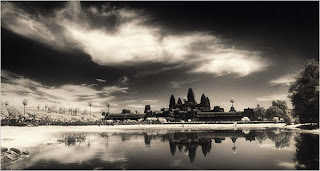 The eerie calm near the moment of a total solar eclipse at Angkor in 1995. (Photo: John McDermott) 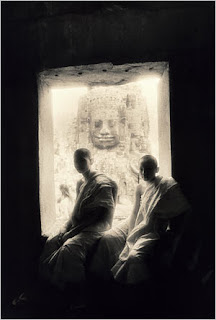 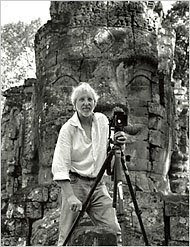 THERE is a moment at Angkor, the vast complex of ancient temples in the Cambodian jungle, that every visitor hopes for. Perhaps it comes while passing under a 60-foot-high gate carved a thousand years ago, or at sunrise when the lotus-like spires are reflected in a placid pool of water. Or maybe it comes when you encounter a centuries-old tree, growing straight from a sandstone slab and slowly devouring a temple.

These are the moments that John McDermott specializes in. A 52-year-old photographer from Little Rock, Ark., Mr. McDermott may be the Ansel Adams of Angkor. In the last decade, his photographs have almost become the definitive images of the temples. His pictures — the silhouette of a stone lion at sunset, monks resting on a windowsill, apsara dancers primping before a performance — are not just beautiful but iconic.

Mr. McDermott didn’t deliberately set out to become the unofficial court photographer of Angkor. He first visited in 1995, when he was living in Bangkok. Back then, the only lodgings were tents and small guesthouses, and few if any tourists traipsed through. To capture the eerie calm, he had planned his trip to coincide with a total solar eclipse.

“The light does really funny things during an eclipse,” he said. “First of all, it’s devoid of color, becomes monochromatic, sort of platinum. And then it ripples and does unusual things, so the whole setting becomes quite surreal” — as if Angkor Wat, with its graciously decaying walls and bas-relief depictions of Buddhist hell, wasn’t surreal enough already.

Capturing that ambience, however, posed a problem; normal film couldn’t match what Mr. McDermott had experienced. Luckily, he had also tested infrared film, which he chose to reproduce a specific appearance. When he developed the infrared shots (which were taken after the eclipse had passed), he found what he had been hoping for: temples bathed in otherworldly light.

“It was a eureka moment, you know?” he said.

Another eureka moment came five years later, when he returned to Angkor for an exhibition of his photographs at the Grand Hotel d’Angkor in Siem Reap, the town that serves as a base for exploring the temples. The new luxury hotel was, to McDermott’s surprise, full of tourists. “I recognized two things,” he said. “One, that the tourism industry had just had the fuse lit for Angkor” and two, that the magical-looking temples were going to change from the tourist onslaught.

Sensing that time was of the essence, he returned on his own several months later to “get as comprehensive a portrait of Angkor as I could,” he said. “I wanted them to look as if they’d been taken 300 years ago, 500 years ago, or yesterday — or tomorrow.”

Over the next several years, Mr. McDermott trained his camera (and infrared film) on Angkor’s crumbling walls, gnarled roots and mystical light. The dreamlike photos, which look as though they were taken in an ancient, forgotten world, have been exhibited and published in magazines and newspapers around the world (including The New York Times) — becoming, in essence, defining images of Angkor.

In a way, his quest for the quintessential Angkor image puts him in a league with Ansel Adams, whose photographs of Yosemite shaped the public’s imagination of that vast and unknowable park. Mr. McDermott’s prints now grace the hallways of Cambodian hotels and are sold in stores as far away as Palm Beach, Fla. And this November, he plans to publish them in a book, “Angkor at the Turn of the Century.”

Meanwhile, change has come to Siem Reap, where Mr. McDermott and his wife, Narisara Murray, settled in 2003. Hundreds of hotels have gone up, a million foreign tourists visit annually, the temples are cluttered with wooden walkways, and Siem Reap is now an arts hub, thanks in part to the two galleries Mr. McDermott opened there.

But Mr. McDermott is no one-trick infrared pony. He has turned his camera to the temples and tribal areas of Myanmar. “Burma’s just a really fantastic destination,” he said, using Myanmar’s former name, “and I think it’s probably going to change pretty quickly.”

In other words: Come 2012 or so, expect Mr. McDermott’s vision of Myanmar to be yours as well.