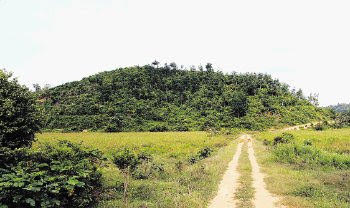 The pyramid-like hills near Tasik Chini have sparked interest in the legend of a lost civilisation.
Lost city of Khmer empire?

PEKAN: The existence of seven pyramid-like hills near Tasik Chini has again sparked interest in the legend of a lost civilisation in the area that could date back to the 12th century.

While there is no proof that the hills are man-made, there is a possibility that it is part of a lost city or may at least shed some light on the mystery.

It is long believed that the ancient city could only be found in the depths of the lake. This is based on a theory that the area was inundated with water after the fall of the Khmer empire, of which the city was a part of in the 15th century.

Although many people have made claims of a sunken city, little effort has been made to unravel the mystery. Based on pieces of porcelain found in the area, the city could have been built when the Khmer empire was at the height of its power.

The Khmer empire was ruled, between 802 and 1432, by a succession of "god kings" and had its capital in Siem Reap, Cambodia, where the famed Angkor Wat temple complex stands.

According to a villager, the "pyramid" was more evident when one of the unique hills in Padang Kerbau was cleared by a plantation company recently.

"Before this, all the hills looked normal. However, the way they were 'positioned' is not natural and that is quite interesting," said Ahmad Najib Mohd Don of Kampung Melayu, Chini.

Ahmad Najib, 57 and his wife, Pauziyah Abdullah, 49, later drove their pick-up truck to the hills and found that the formations stood in a swampy area.

Although she was born in Kampung Melayu, Pauziyah said she never realised the peculiar shape of the hills as they were covered by vegetation.

"The hills are also inaccessible because of the swampy land which surrounds them."

The new development has excited archaeologist, Professor Datuk, Dr Nik Hassan Shuhaimi Nik Abdul Rahman, who was known for his leading role in the expedition to locate the lost city in 1998.

"There's a possibility as we cannot say for sure its exact location. It can be in the lake or on land," said the senior research fellow at Universiti Kebangsaan Malaysia when contacted.

He said there was no conclusion during the two-week exploration nine years ago as the team had lacked funds.

"We managed to drain a small part of the lake but the compartment walls collapsed when we were about to clear a layer of mud on top of a rocky base."
Posted by Leadership at 12/10/2007 11:51:00 PM