This Pilgrimage, Like The Best, Leads Back To Yourself 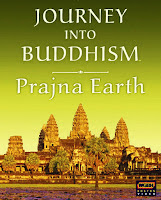 Pilgrimage is the time-honored journey to places sacred. Of course, the earnest pilgrim who wisely follows his or her intuitive spiritual compass always arrives at the most sacred of places: one's self. The ultimate pilgrimage, for those willing to leave their personal baggage behind as they travel, is a rite of passage as much as a passage through time and space.

I took a journey last night in front of my television, watching a trilogy of documentary films by an old friend, John Bush. John is a visionary in the truest sense: he uses his visions and images for the purpose of transformation. In an earlier incarnation, his claim to cultural fame in the transformational times of the mid-1970s was to have started a company called Illuminations with his then wife Mirabai Bush. They silk-screened images of the Buddha and simple Tibetan mandalas onto transparent plastic that could be stuck onto any surface. They called them Dharma Seals. Soon those Buddhas and their most successful product, a rainbow, were ubiquitous -- on the rear windows of VWs, on dormitory billboards, even on the windows of John and Yoko's apartment at the Dakota in Manhattan (I saw them). After he and Mirabai split up, John went on to become a filmmaker.

On an extended pilgrimage throughout Southeast Asia, he traveled with a Sony digital video camera recording his impressions of the iconic Buddhist centers in Laos, Thailand, Burma (now Myanmar), Bali, Cambodia, Java and Central Tibet. He calls the resulting three films he made Journey into Buddhism: The Yatra Trilogy; yatra is the Sanskrit word for pilgrimage.

When I came back from my own first spiritual pilgrimage to India in 1974, only one film I found came anywhere near close to evoking the feeling of being there. It was director Louis Malle's 1968 Phantom India, a black-and-white documentary so realistic you could almost smell the Indian beedie cigarettes in the movie theater. Until seeing John's Yatra Trilogy, it remained, to my mind and my eyes, the only film that captured the attraction-repulsion, the frustration-exhilaration, the enigma-revelation of India or anywhere
else in Asia.

Last night John took me back, back to Asia, back to my own recent pilgrimage in the footsteps of the Buddha for my book Buddha or Bust, back to that place in myself where I know the search for truth, meaning and happiness gratefully will continue.

With unblinking patience, John draws the viewer into his journey. His slow pans across a landscape such as Angkor Wat in Cambodia test our own patience, conditioned as we are to fast cuts and instant gratification. His use of ambient sounds throughout all the films give a sense of presence, of immediacy, and in such a subtle manner as to go almost unnoticed. Almost. At Borobudur Temple, the 9th century mandala monument in Java, the sounds of birds and flies and chanting in your ears bring to life ancient rumblings of spirituality. I knew this was where a vibrant spiritual community existed. John's film reminded me this is where it's still happening for those still enough -- or for a camera quiet enough -- to witness it.

For John, the six years it took to create The Yatra Trilogy was the "realization of a long deferred dream."

"I had always made my living in the more commercial arena," he said. "Now I had the opportunity to take a risk creatively in a medium that had always drawn me. This project allowed me to stretch as an artist and interestingly the art became my spiritual practice in a way it hadn't before."

Along with the personal reward simply of taking the journey, he now is enjoying sharing it with others. It had its American premiere in 2005 at the Rubin Museum of Art in Manhattan. It has since shown in more than 50 cities, including coinciding with His Holiness the Dalai Lama's American itinerary in the fall of 2006. The films are currently screening at the Norton Simon Museum in Pasadena and at the Museum of Asian Civilizations in Singapore. In February the trilogy will have its Australian premiere at the National Gallery of Australia in Canberra and screenings at the Seattle Art Museum. And just recently John teamed up with WGBH Boston, the premiere producer of programming for PBS, which is distributing nationally a special boxed 3-DVD collection, entitled Journey Into Buddhism : The Yatra Trilogy, available for $34.95 (a 10 percent holiday discount).

John next sets his sights on a visual pilgrimage of another sort. He is currently in post-production on a dance art film entitled Shimmer, shot entirely outdoors throughout New York City in collaboration with his partner, the French-born choreographer and dancer Nadine Helstroffer.

If The Yatra Trilogy is a Buddhist video pilgrimage, I am sure Shimmer will be an equally revelatory journey into the heart of a city and a woman he loves.
Posted by Leadership at 12/21/2007 10:02:00 PM