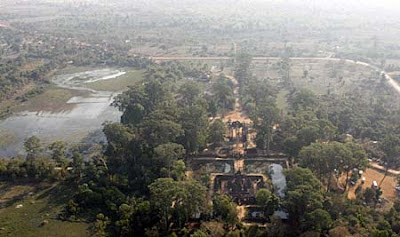 An aerial view over Banteay Srey temple, one of the many stone monuments built during the Angkorian period, in Siem Reap province, Cambodia, on Wednesday Jan. 23, 2008. (AP Photo/Heng Sinith)
Wed. Feb. 13 2008
The Associated Press

SIEM REAP, Cambodia -- By destroying vast tracts of forest to enlarge their farm land, inhabitants of the wondrous city of Angkor lit the fuse to an ecological time bomb that spelled doom for what was once the world's largest urban area.

So believe archeologists engaged in groundbreaking research into the ancient civilization of Angkor.

And they are warning that history could repeat itself through reckless, headlong pursuit of dollars from tourists flocking to see Angkor's fabled monuments.

"It's just a weird cycle. It seems like Angkor is self-repeating itself,'' said Mitch Hendrickson, who recently led an excavation as part of research into Angkor as a human settlement.

Conservationists have long expressed concerns about the state of the monuments, especially the stress from the tourist invasion. They also say the uncontrolled pumping of underground water to meet rising demand of hotels, guesthouses and residents in the adjoining town of Siem Reap may be destabilizing the earth beneath the centuries-old temples so much that they might sink and collapse.

"There's just so much building going on without any concern about the long term. Things are moving so fast in Siem Reap today that it's going to chew itself up very quickly and become unsustainable,'' said Hendrickson, an archeologist from the University of Sydney, Australia.

From their city, Angkorian kings ruled over most of Southeast Asia during their pinnacle between the ninth and 14th centuries, overseeing construction of architectural stone marvels, including Angkor Wat, regarded as a marvel of religious architecture.

While the 1431 invasion from what is now Thailand has long been regarded as a major cause of Angkor's fall, archeologists from the Australian university's Greater Angkor Project believe earlier ecological forces led to the city's demise.

Their findings supported a theory in the early 1950s by Bernard-Philippe Groslier, a prominent French archeologist, that the collapse of Angkor resulted from over-exploitation of the environment.

But gradually, they cut down natural forest to extend their farmland up to the slope of Kulen mountain, 80 kilometres to the north, said Fletcher, who led 10 archeologists to excavate various sites near the Angkor complex.

Flooding ensued, and huge amounts of sediment and sand were washed down to fill up canals -- thus probably choking the vital water management system.

Using NASA's airborne imaging radar data, the project has conducted numerous aerial and ground surveys across nearly 3,110 square kilometres which revealed that the city -- with about one million inhabitants -- was far larger than previously thought.

It covered some 1,000 square kilometres and featured a sophisticated hydraulic system that proved too vast to manage.

Angkor was "a huge low-density, dispersed urban complex'' comparable to Los Angeles and "by far the most extensive preindustrial city on the planet,'' Fletcher said.

Its water network included an artificial canal used for diverting water from a natural river about 25 kilometres north of Angkor, and two mammoth, man-made reservoirs known as the East and West Barays.

"They (people) probably didn't necessarily need any of this extra water ... because just a rain-fed rice agriculture is quite sufficient to feed a very substantial population,'' said Damian Evans, a project member.

One theory, he said, was that the Angkorian kings built the water system just "to demonstrate their power and their authority to rule.''

But he said only excavations and soil analysis could yield more clues.

"It's a process of going to those sites on the ground and looking for finer detailed information like the profiles of the canals underneath the ground and the types of sediment that lie within those canals,'' he said.

Armed with a printed digital map of the Angkor area, Evans and Fletcher toured an excavation site at the West Baray where archeologists dug trenches to seek traces of an ancient channel through the bank. They were trying to determine whether the channel really existed and could have served both as water inlet and outlet.

The reservoir is walled by four banks -- now covered with jungle -- each 12 metres high, 110 metres wide and about 20 kilometres in length. It can store up to almost 51 million cubic metres of water.

Fletcher called it "the single largest artifact and piece of engineering in the preindustrial world.''

"All of this work is aimed at understanding how the water management system of Angkor functioned ... and how it stopped working,'' he said, adding that forest clearance is "the current key piece of information'' about the ecological peril that caused Angkor to tumble.

Although past environmental problems were associated with deforestation, they also underline the menace the tourism boom is posing to the temples, the researchers say.

"The same types of things which we knew were problems of Angkor are essentially being repeated in our modern-day context in the Angkor area -- things like unsustainable use of water, massive overdevelopment without any consideration of the long-term effects,'' Evans said. "There's definitely lessons to be learned from what happened here before.''
Posted by Leadership at 2/14/2008 12:38:00 AM