Angkor has survived years of neglect, the colonisation of the jungle and the vandalism of the Khmer Rouge. But can it survive the tourists?

In Beng Melea, I have my first real Angkor experience, sitting amidst the rubble under the canopy of trees in the dim green light of a temple complex totally consumed by the jungle. 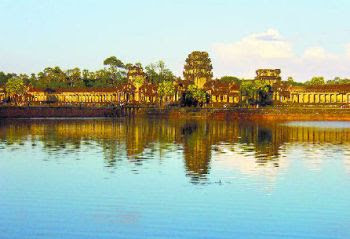 Arresting in its sheer scale: The Angkor Wat complex. (Photos: Mukund Padmanabhan)
Siem Reap, the gateway to the Angkor temples, is hardly the ideal place to concentrate the mind. Invited to attend a seminar, I find my attention wandering between the presentations and the temples, searching for ways to get out and spend time amidst the magnificent ruins in the thin interstices of symposium time.

Having checked into my hotel, there is a little over an hour before dusk. Why waste precious daylight? A tuk-tuk driver offers to take me to Phnom Bakheng to see the sunset. “Only two dollahs,” he says. “View vely vely nice.” I take his word for it and jump in the back of his spacious but wobbly machine. It is a short ride, one that sweeps past the spectacular moat-fringed walls of Angkor Wat and stops a little further at the base of a hill.

Here, I learn my first lesson about “remote” and “mystical” Angkor. For a place rediscovered only in the 1860s, protected by a thick belt of jungle, virtually cut off until 1998 due to a genocidal civil war, Angkor today lies on a road that is very well travelled. (“The world’s most crowded offbeat destination,” someone joked a couple of days later.) I guess I should have realised this when I passed the string of hotels that led to my own on the way from the airport. Or even before, when I spotted the Icelandair jet parked on the tarmac.

So then, I am not the only one with the sunset idea. Hundreds of others have planned to catch the last rays from the temple on the hill and I join the cheery chattering swarm on the way up. I make a list of nationalities from appearances, accents, dress and behaviour: English, German, French, Spanish, Italian, Arab, American, Thai and the ubiquitous groups of Japanese.

By the time I reach the summit, the swarm has settled on the top of the temple, perched on the edges, their cameras catching the surrounding plains in the dying light. Built at the end of the ninth century, Phnom Bakheng houses the ruin of a Shiva temple built on what was known as Sri Yasodharagiri. Built on a series of tiers, the uppermost platform, which is reached by steep stone steps flanked by lions, has a central tower that, like the numerous lesser ones, lies in a magnificent ruin.

There are four shivlings in each corner of the top tier and I spot a North American woman in biker shorts using one of them to support her Nike-clad foot as she fires a battery of photographs from her digicam. Perhaps, it is the sheer absurdity of it all. Or perhaps it is the sudden emergence of some deep and dormant element of my Hindu upbringing? But something gives. I ask her if she wouldn’t mind taking her foot off and then attempt to explain the significance of the shivling as she watches in open-mouthed astonishment. “I really wouldn’t have known,” she keeps apologising. When I turn away, I overhear her tell her friends. “Now, isn’t that awesome? You wouldn’t see this in Vancouver, would you?”

It isn’t until two days later that the next round of temple tourism becomes possible. The agenda is modest. A late afternoon visit to the mother temple, Angkor Wat, preceded by a quick walk through Ta Phrom. Known once as Rajavihara, Ta Phrom was built under Jayavarman VII in the 12th century. The Buddhist monastery — whose crumbling walls and towers are snugly wrapped by the sinuous roots of towering strangler figs and silk cotton trees — is the stuff of picture postcards. Literally. At one store outside Angkor Wat, 50 per cent of the postcards are of this carefully arranged ruin. Carefully arranged, because contrary to popular belief, Ta Phrom was not left entirely as it was after it was re-discovered by French explorers in 1860. Plenty of restoration work has been done to stabilise the ruin and maintain the atmosphere of deliberate neglect, in which architecture and nature are locked in inseparable and mysterious embrace. I think it reminds me of something out of an Indiana Jones film, until someone tells me I should be thinking about its more contemporary gender-reversed version, Tomb Raider, or the place where Angelina Jolie plucked a jasmine flower to find herself sucked into the earth.

Angkorian temple builders thought large. Ta Prohm is by no means small; it was once home to 12,500 people, including 615 dancers. Angkorian temple builders dealt in large dimensions but nothing has prepared me for the size of mother temple, the next stop. Set in a complex that spreads over 81 hectares, the world’s largest religious monument, glowing with faded grandeur in the late afternoon sun, is arresting for its sheer size. It is impossible to be Indian and not wonder, while walking through this gigantic complex, why isn’t there anything in India even remotely as big as this early 12th century temple built by King Suryavarman II and dedicated to Vishnu. It is true that Angkorian temples (with the possible exception of Banteay Srei) lack the sculptural detail of their Indian counterparts; with respect to scale, however, they are unmatched.

Swept along with the swarm of people through the radial corridors and the concentric courtyards of this immaculately symmetrical structure, it is clear that Angkor has already become a tourist trap. Having survived years of neglect, the colonisation by the jungle, and the vandalism of the Khmer Rouge — which seemed intent of destroying all traces of Cambodia’s past — the question is: will Angkor survive the invasion of tourists? Less than 10,000 tourists visited Angkor Wat when it was put on the UNESCO heritage list in 1993; in 2005, the figure touched 1.4 million and is estimated to be in the region of three million by 2010. From a one-hotel town two and a half decades ago, Siem Reap now has them in scores.

As officials warn about the possible environmental damage from the tourism boom, the numbers of people going keep growing. Last year, the private company responsible for issuing tickets to the temples netted a cool $25 million. People come to Siem Reap from just about everywhere. Outside Angkor Wat, I am intrigued by a sprightly little girl with mud-streaked hair and a toothy grin — she is wearing a bindi. She senses my curiosity and tries selling me reed bangles. “Come on,” she urges in an American accent. “It’s cheap — only one dollar”. “But I am carrying only euros,” I lie. “No problem,” she retorts and cites the price in a range of currencies — including rupees. After being charmed into making the purchase, I point to the bindi and ask where she got it. “Oh, this,” she replies hurriedly before scampering off to a potential customer she has spotted. “An Indian tourist gave it to me.”

On my last day, there is time to escape the tourists. I visit Bayon — with its strange stone faces and its otherworldly air — and then take an expensive taxi out to Beng Melea, an hour and a half away. The literature on the temple sounds promising — one booklet says it is one of the few temples where you can escape the tourist crush and my Lonely Planet describes it as a “spectacular sight” and “one of the most mysterious temples of Angkor”. Unlike Ta Phrom, Beng Melea has been totally left to nature. Finding your way around means hauling yourself over piles or rubble and climbing on walls and other vantage points for a view of the complex, which is structured pretty much like Angkor Wat.

There is virtually nobody around and I think I have my first real Angkor experience, sitting amidst the rubble under the canopy of trees in the dim green light of a temple complex totally consumed by the jungle. This is what Angkor was not so long ago. And this,