Temple of Boeng Mealea of Cambodia 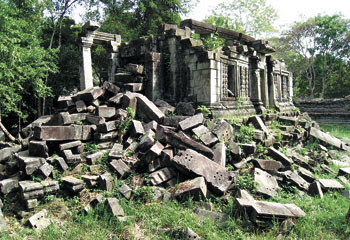 IF you want a good reason to weed your garden pavers this morning, look no farther than the temple of Boeng Mealea in Cambodia.

This extraordinary 11th century structure is a tumble of massive stones resembling a Lego castle after a child's tantrum.

Its destruction is a testament to the inexorable power of fig roots and other jungle vegetation over hundreds of years.

I know the theory and I have seen the process in its relative infancy at other temples but it seems barely credible that this is the result of time rather than some instant cataclysm.

Yet there is no history of earthquake in Cambodia and not even the ruthless and murderous Khmer Rouge visited such destruction on the temples, although they quite possibly would have if they could have.

Unintentionally, the Khmer Rouge preserved Boeng Mealea from the worst trespasses of modern tourism by seeding the area with landmines.

More adventurous visitors have been trickling in for some time but a sign at the entrance tells us that Minefield M7757 was finally cleared only late last year.

(A sign reading: "This minefield funded by the Federal Republic of Germany" raises the odd eyebrow, but we know what they meant.)

Although much of Boeng Mealea is ruins, parts of the walls are largely intact, powerful reminders of the grandeur of the original structure.

It is one of the largest temples outside the main Angkor complex but it is strangely quite and reflective in the absence of hordes of tourists.

The encompassing vegetation makes it blissfully cool in the dry season but suffocatingly humid in the wet.

Travel Indochina is among the first to add the temple to its itineraries but the ubiquitous tuk-tuks are there with backpackers and others with the fortitude to make the dusty two-hour drive from Siem Reap.

Carpenters are labouring at Cambodian pace to erect protective and safety-first stairs and boardwalks but, for now, tourists are free to clamber through, over and under the ruins.

It's not archeologically correct but it's a lot of fun although, in parts, quite strenuous and potentially dangerous.

It's so far out in the boonies that the panhandlers haven't got there in strength, although the vanguard has arrived.

Making up for them are temple guards who are helpful to the point of distraction in the expectation of a buck at the other end.

But before you brush them off, you might appreciate their help on some of the scrambles.

The opening up of Boeng Mealea is symbolic of a growing understanding of the magnitude, might and significance of greater Angkor, a huge complex of sophisticated temples once woven together by a network of roads and canals and home to countless villages that have disappeared into wood dust.

Guides proudly tell that at its peak of power in the 15th century 1 million people lived in Angkor at a time when London was little more than a largish town with attitude.

To an extent, our understanding suffers from the success of Angkor Wat, which many tourists think is Angkor, a little like thinking the Colosseum is Rome when it is only a fragment of the grand mosaic.

And, if you ever have the joy of greeting the day at Angkor Wat, you can understand why.

It embraces you in a strange pre-dawn intimacy that gradually disappears as the rising sun reveals hundreds of shutterbugs straining to capture the sunrise shot that might somehow have eluded millions of others.

Filling the gap in the understanding of the inter-related temples and making more intelligible the relationships between Hindu deities and Buddhist worship is nearby Siem Reap's National Museum, an imaginative newcomer that still seems largely off the tourist map, although admission is included in the hefty Angkor Park entrance fee ($45 for three days).

The Angkor complex deserves the same historic and tourist attention as the remains of ancient Egypt, classical Greece and ancient Rome.

And increasingly it is getting that attention and becoming so much more than a curiosity on the backpacker track.

Siem Reap is waxing fat on the Angkor industry, which is a good thing in one of the poorest countries in the world.

People lament the hordes of tourists and the rash of new hotels but it still remains a great-value destination with accommodation ranging from the modest to the luxurious.

(Closest to the temple complex is Le Meridien, a swish newcomer with one of the best pool complexes you could hope for.)

Most of the more garish hotels on the outskirts cater for fly-in, fly-out, eat-at-the-hotel Koreans, so the centre of the city remains pretty much as ever, although increasingly clean and tidy.

And Cambodian food, which classically predates the introduction of the chilli, has a subtlety and complexity that relies on herbs and spices rather than fiery heat for its excitement.

Pick the right place and you'd have to be very hungry or very thirsty to spend more than $6 a head for dinner and drinks.

And it doesn't matter where you stay, a couple of bucks in a tuk tuk will get you to a good restaurant, a great bar and a taste of the indefinable something that is Cambodia.
Posted by Leadership at 2/03/2008 08:57:00 PM