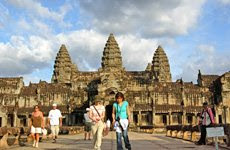 The fast and huge growth in tourist numbers is putting environmental pressure on one of the world's premier heritage sites of Angkor Wat in Cambodia. Photo / Reuters
Wednesday March 19, 2008
The New Zealand Herald
At first glance, it is business as usual at the great sandstone temple of Angkor Wat. Through a drape of evening haze, the ancient Cambodian superstructure sees another batch of tourists process across its moat and marvel at its grandeur.

Local teenagers waggle cool drinks in the faces of passers-by and auto-rickshaw or "tuk-tuk" drivers loudly vie for business. It looks like what it is - a boom town.

But the modern commercial success of the complex, on the site of the ancient city of Angkor, may, literally, be on shaky ground.

Heritage experts carrying out restoration work at the temple say a plethora of new hotels, cashing in on the country's near-exponential rise in tourist numbers, is sapping gallons of water from beneath nearby urban areas. They say this could upset the delicate foundations on which Angkor Wat sits and may lead to parts of it taking an unheavenly tumble to earth.

Philippe Delanghe, the culture programme specialist at Unesco's Phnom Penh office, said this week: "There is an important balance between the sand and water on which the temple is built. And if that balance is taken away then we might have trouble with collapse.

"The growth in the number of hotels means more holes are being drilled for water. And this has profound consequences for this mix.

"We saw something similar with the weakening of the stability of ruins in Indonesia two years ago, and there is the possibility that we will see something like this here."

Locally, it is easy to see why such comments go down badly. The temple, which appears on the national flag, is the jewel in Cambodia's heritage crown. Not only is it in the best condition of any such structure at the Angkor site, it has been tightly linked with Cambodia's history for nearly a millennium.

It is thought to have been built as a funerary temple for King Suryavarman II (who died in 1152) to honour Vishnu, the Hindu deity with whom he identified.

The sandstone blocks from which it was constructed were quarried more than 30 miles away and floated down the Siem Reap river. Recent research suggests that Angkor was an urban settlement covering some 700 square miles, comparable in size to Greater London, and therefore the world's largest medieval city.

In 1993, when Angkor was first added to Unesco's World Heritage List, the Khmer Rouge (a leftover from the Vietnam War) were still active in certain areas. Some 7600 people visited the temple complex that year. Since then, however, Cambodia has become "safe" and package tours have landed in fleets. In 2007, about two million tourists visited Cambodia, with half stopping at Angkor Wat.

With tourist traffic continuing to increase by about 20 per cent year on year, some three million people are expected to visit the country in 2010.