Buddhists who stand up 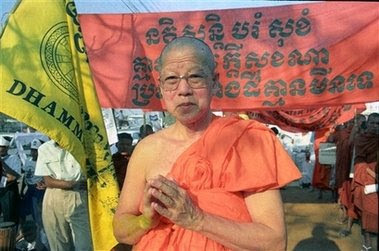 NEW YORK:
Westerners tend to think of Buddhism as a passive religion, focused on silent meditation and personal spiritual growth. The image of the Buddha seated with a smile sums it up.

So while the West is highly familiar with conflict and activism in other religions, the "saffron revolution" in Burma and the "high altitude revolt" in Tibet have come as a surprise to many.

In fact, there is a healthy tradition of Buddhist activism. Often called "engaged Buddhism," a term coined by Thich Nhant Hanh, a Vietnamese Zen Buddhist monk, it encourages a Buddhist critique of governmental and economic structures and other efforts to alleviate social suffering.

In Sri Lanka, the Sarvodaya Movement works in over a thousand villages to empower the poor. Maha Ghosanand, a revered Cambodian Buddhist monk, led thousands in peaceful walks through the "killing fields" to seek reconciliation with the Khmer Rouge. Nhant Hanh himself called on both North and South Vietnam to stop their bloodshed.

In Thailand, the "Forest Monk" Prachak "ordained" trees in the forest by wrapping monks' robes around them to save them from loggers. The Taiwan-based Tzu-Chi movement has thousands of volunteers who respond to natural and man-made disasters.

The Reverend Nakagaki of the New York Buddhist Church holds an annual service on the anniversary of the bombing of Hiroshima. After 9/11, he recalled America's use of internment camps in World War II and called on all Buddhists to help Muslim citizens. Nakagaki is fond of showing an image of the Buddha who is standing up.

He says that Buddhism is about having a peaceful mind, but not just sitting there.

Buddhist activists cite Buddhist scriptures to argue that they say they are simply following what the Buddha taught. In one, the Buddha confronts a murderer who was on the verge of killing his mother; in another, he stopped a war between two tribes.

A third example is the idea of the Bodhisattva: a being who works tirelessly to save all other beings from suffering.

One source of the Western misunderstanding of Buddhism is our fascination with meditation. While meditation is as critical to Buddhism as prayer is to Christianty, Judaism and Islam, it does not preclude action, any more than prayer does.

In fact, the Buddhist focus on meditation emphasizes a state of mind that can lead to a particular kind of activism - walking meditation and nonviolent resistance - as demonstrated by the Maha Ghosandanda in Cambodia or the monks in Burma.

The misunderstandings continue with the term "Buddhist monk." "Monk" is a Christian term for religious ascetics who generally practice their faith in isolation from the world. The word comes from the Greek "monos," "alone."

But "Bikkhu," the Buddhist term for monk, translates literally as "beggar."

Bikkhus are required to teach and guide the lay community and to beg for their food. From their very inception in Buddhist practice, Bikkhus have had a deeply recriprocal relationship with the lay world - including the government - as teachers and spiritual models. They have always been active in the world.

Another notion that does not stand up under historic scrutiny is that all active Buddhists are peace activists; indeed, there are those who argue that there has never been a Buddhist war. But there are also unfortunate examples throughout history of Buddhist participation in government oppression and violence.

Yet it is the peaceful activism for which Buddhist monks are best known and most respected. That they have opposed injustice in Burma and Tibet should not be a surprise; that they have not met violence with violence should be commended.