Tranquil Temple at Centre of a Storm 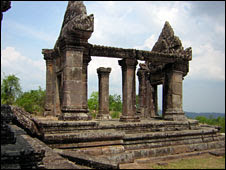 The temple stands atop mountains on the Thai-Cambodian border 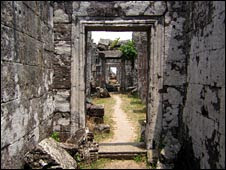 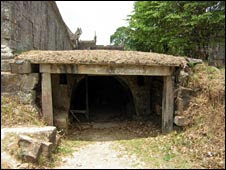 Signs of the temple's Khmer Rouge occupants are everywhere 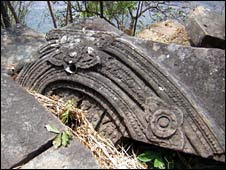 Parts of the temple are in need of restoration work

Thursday, 22 May 2008
By Philippa Fogarty
BBC News, Bangkok
The view from the top of Preah Vihear temple is well worth the steamy, uphill trek to get there.

Stone steps and paths lead visitors through a series of ancient entranceways to the carved sanctuary high in the Dangrek mountain range.

Look one way and a Thai flag flies on a distant rocky outcrop. Turn the other way and the cliffs fall sharply down to the blue-green Cambodian jungle below.

At the top, the only sound is of cicadas and dragonflies. Lower down, in a market with a frontier feel to it, vendors sell gems and rare animal parts.

Things were good these days, one vendor said. The temple was open and visitors were coming. "The war is over," he smiled.

But the temple has not always been so accessible, or so peaceful.

Bullet holes scar one stone wall, while to the side of another stands a rusting artillery gun. Further down, both Cambodian and Thai guards maintain a low-key presence.

These are reminders that bitter battles have dominated Preah Vihear's recent history - and that one of them is still being fought today.

Preah Vihear was built mainly in the 11th and 12th centuries when the Khmer empire was at its height, its construction ordered by the kings that commissioned the temples of Angkor.

According to Sanskrit inscriptions, it was called Sri Sikharisvara, meaning Glorious Lord of the Mountain - a dedication to the Hindu god Shiva.

It sits on a mountain-top promontory, facing north towards Thailand. The main access comes from the Thai side, because of the sheer cliffs behind it.

Cambodian ownership of the temple was first formally established in boundary settlements between its colonial ruler, France, and Siam, as Thailand was then known, a century ago.

A joint commission in 1904 set the border between the two countries atop the Dangrek mountain range - but its subsequent map, in 1907, put Preah Vihear in Cambodia.

In 1954, shortly after Cambodia achieved independence, Thai forces occupied the temple. In response, Cambodia took its case to the international courts.

Thai authorities argued that as the border was supposed to follow the watershed line of the mountains, the temple was theirs. They had not challenged the map, they said, because their access to the site gave them de facto control over it.

But the court ruled against Thailand and in 1962, the Thai troops withdrew.

More trouble was in store for Preah Vihear as conflict engulfed Cambodia.

With its hill-top location, it was the last place to fall to the Khmer Rouge in 1975. Four years later, when a Vietnamese invasion swept the Maoist regime from power, it was one of the strongholds to which the Khmer Rouge retreated.

Years of fighting followed. Government forces managed to reopen the temple briefly in 1992, but Khmer Rouge guerrillas soon seized it back. Scores of fighters holed up in reinforced bunkers and held the complex for six more years.

But the Khmer Rouge was on its last legs, its leaders dead or defected.

In December 1998 the commander of the last group of fighters met negotiators at the temple to agree a historic surrender - one that ended three long decades of civil war.

Preah Vihear could finally be reopened. Landmines were cleared and paths made safe.

Visitors began to return, market traders set up stalls and there was talk of much-needed restoration work.

But the sovereignty row lingered on. In late 2001, Thai troops blocked access for a more than a year in a row over polluted water at the site.

Since then, it has stayed open, but the issue remains extremely sensitive - as Cambodia's application to have Preah Vihear listed as the country's second Unesco World Heritage site has shown.

The added prestige would bring technical assistance from Unesco and other donors, he says, while the listing would formalise Cambodia's obligations in terms of managing and maintaining the site.

It could also be a boon to the tourism industry, Cambodia's second biggest foreign currency earner, particularly given work to improve access from inside Cambodia.

But there is a problem. Although the international courts settled the row over the temple itself, the surrounding land remains the subject of overlapping territorial claims.

Thailand says it would not object if Cambodia applied to list the temple area only. But it says Cambodia has, in its submission to Unesco, included disputed territory within the listed zone.

It wants both countries to jointly manage the disputed areas until the border is agreed - and last month, sent a formal protest to Cambodia accusing it of deploying troops and mine clearers in a mutually-claimed area.

Senior officials from the two countries are due to meet at Unesco headquarters in Paris today in a bid to iron out the dispute.

"We would like to reach a win-win agreement," The Bangkok Post quoted Thai Foreign Minister Noppadon Pattama as saying ahead of the meeting. "We will try to be more flexible."

Preah Vihear is not about to fall down - it has already survived a great deal.

It is a staggeringly beautiful reminder of the area's turbulent past. Perhaps soon it will be known only for this beauty, rather than for the battles fought over it for so many decades.
Posted by Leadership at 5/22/2008 12:05:00 AM