From the Pantheon of Masterpieces

From the Pantheon of Masterpieces [-Khmer Royal Ballet] 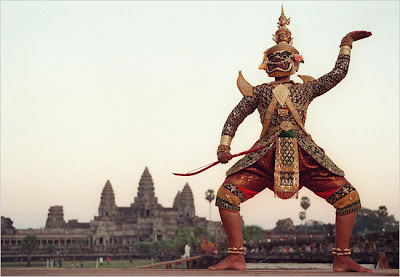 If the United Nations cultural agency Unesco approves a proposal from France’s president, French food would join these “masterpieces” on the Convention for the Safeguarding of the Intangible Cultural Heritage:

CAMBODIA: ROYAL BALLET Renowned for their graceful hand gestures and stunning costumes, performers would traditionally accompany royal ceremonies and observances. This art form, which narrowly escaped annihilation in the 1970s, is cherished by many Cambodians.

LATVIA, LITHUANIA AND ESTONIA: BALTIC SONG AND DANCE CELEBRATIONS Large festivals are held for several days every fifth year in Estonia and Latvia and every fourth year in Lithuania. As many as 40,000 singers and dancers assemble, mostly from amateur groups.

MEXICO: DAY OF THE DEAD This celebration commemorates the return to Earth of deceased relatives and loved ones each year at the end of October and the beginning of November. Families lay flower petals, candles and offerings on a path from the cemetery to their homes.

VANUATU SAND DRAWINGS Multifunctional “writing,” these drawings are produced directly on the ground. Using one finger, the drawer traces a continuous meandering line on an imagined grid to produce a graceful, often symmetrical, composition of geometric patterns.

ZIMBABWE: THE MBENDE JERUSAREMA DANCE A dance characterized by acrobatic and sensual movements by women and men, driven by a polyrhythmic drummer accompanied by men playing woodblock clappers and by women clapping hands, yodeling and blowing whistles.
Posted by Leadership at 9/24/2008 12:10:00 PM