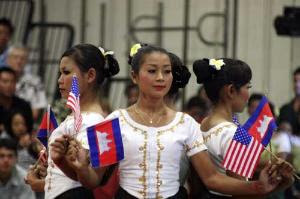 When people think of the country of Cambodia, what comes to mind? Death, poverty, destruction?

Today, Cambodia is one of the most poverty-stricken countries in Southeast Asia. Because of the 1975-79 Khmer Rouge era and the Vietnamese invasion that followed, Cambodia's rich culture was virtually obliterated. Pol Pot, leader of the communist regime, had overthrown the existing government and attempted to "restart civilization in Year Zero." This cultlike agenda to strip Cambodia of its identity and bring civilization back to archaic, agrarian life was as devastating to Cambodia as the Cultural Revolution was to China. And yet the destruction would not end here. When the Vietnamese invaded, the chaos increased.

What is left? What could possibly remain from such crimes against humanity?

The Cambodian spirit lives on, as unbelievable as that seem. I saw it with my own eyes -- the smile of a few Cambodian teenagers who seem to have transcended the most horrific of evils, transforming the most tragic of events into the most inspirational of stories.

A few weeks ago, my school was fortunate enough to host a few Cambodian teenagers from the Future Light orphanage, a facility in Phnom Penh devoted to sheltering Cambodian children from the poverty-stricken environment they live in and helping them develop the skills needed to become future leaders. Because they were coming to Hawaii to meet their sponsored foster parents -- many of whom are Mid-Pacific Institute faculty -- for the first time, the plan was for them to first perform their indigenous dance for the school at a special assembly. After this, a few MPI performing arts students were to share their dance technique and style with them.

When the assembly started, no one really knew what to expect. So many questions flooded people's minds. How did these Cambodian dancers survive such traumatic ordeals? How many of them were they? What would their dance be like?

All these thoughts were extinguished, however, once the dancers came out onto the floor. Once the music started and the dancers began their intricate hand gestures, I almost forgot that these were teenagers who had been born into such turmoil. Their dance said it all. The grace, confidence and simple gleefulness with whichthey danced suggested that these Cambodians could retain their humanity in a society that had virtually none.

While the student body was inspired by the dance the Cambodian teenagers performed, we still thought of them as victims. As much as I admired their achievements and enjoyed their presence, there was a hint of pity in my perception of the Cambodians. It wasn't until we walked up to the dance studios and interacted with them through dance privately that I started to perceive the Cambodians as my new friends rather than orphans.

It came to me in an epiphany that this was not a time to sympathize or grieve. Rather, this was a time to share one's culture with the other, laugh with each other -- take pleasure in the human spirit for all its tenacity and fervor.

As they taught us how to do the Khmer dance with our hands and we showed them how to pop and lock; as both Cambodian and MPI student alike constantly pulled out cameras, insisting on more and more shots as we gazed in pure delight and awe each other's moves; as e-mails were exchanged and hugs were given, I realized that this was much more than a special assembly -- this was the epitome of the human spirit.
Posted by Leadership at 10/14/2008 01:13:00 AM