Charmed by the steps of the ancients in Cambodia 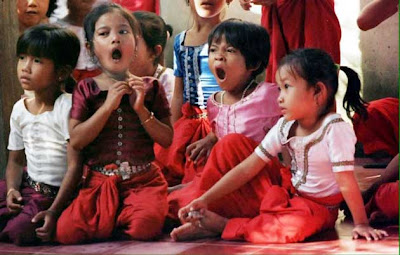 Life chances: students at the Apsara Arts Association range from four to 23; many are orphans (AFP/Getty Images) 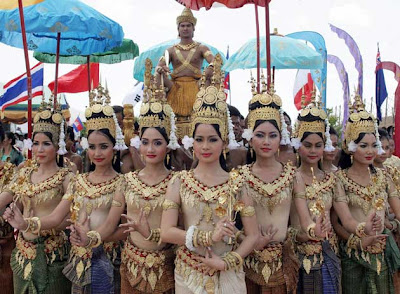 Golden treasure: apsara dancers take years to learn the requisite control of both body and mind (AFP/Getty Images)
Pol Pot and the Khmer Rouge did their best to wipe it out. But Cambodia's historic dance is making a recovery of sorts

Boramey Chhaychan is 23. She has been dancing since she was nine, and learning apsara – the ancient and almost extinct dance of Cambodia – for the past six years . "It takes a huge amount of concentration to be the best," she tells me as she smoothes down the tiny creases in her makot – the silk gown into which she is sown before each performance, in order to achieve the requisite figure-embracing fit.

"The body has to be soft and flexible at the same time, your fingers have to be soft, too. There's also so much bending involved if you are the lead dancer that you absolutely can't be fat either," says Boramey. The list of requirements goes on. The apsara dancer should have, according to instruction manuals, "a round body like the body of a red ant" and "the eyes must be oval and sharp with folds in the eyelids".

Assuming that their eyelids are blessed with the requisite folds, the apsara dancer can then take to the stage, accompanied by instruments including the kong thom, a horseshoe-shaped semi-circle of metal chimes resting on wood that the player sits in the middle of, taut drum skins called rumana and a fish-skeleton-shaped xylophone called roneat thung.

Tonight, after days of sporadic power cuts, electricity miraculously returns to light up the stage as Boramey begins to perform the ancient dance of the perfect celestial female beings of the Khmer kingdom. Her hips roll in slow motion, fingers rise coquettishly to the hips and lips, long thin fingers are outstretched, beckoning and then recoiling. But only the tiniest glimmer of coy sexuality is ever hinted at. The falsetto choir of voices of the dozen singers to the side of the stage wails as the drum, slow and steady as a heartbeat, begins to flutter and float. Boramey kneels on the floor, seemingly as brittle as a falling leaf, before rising like an uncoiling snake. Her bare soles and heels are just as expressive as the hands and arms; every limb creates a flowing narrative of shapes.

Boramey ends by joining both thumbs together in the centre of the chest – an expression that is circumspect, meditative and motionless.

This extraordinary dance dates back to the 12th century. Yet in the late 20th century Pol Pot and the Khmer Rouge almost succeeded in wiping it out for ever.

Even now, it only just survives: "The locals don't really seem to care about apsara," laments Vang Metry, of the Apsara Arts Association. "We only really get visitors from overseas who come to see our students perform. I give away free tickets sometimes but still almost nobody from round here shows up. They'd rather go and see rock'n'roll, I guess."

The Apsara Arts Association, set up 10 years ago, is a remarkable creation. It is located in the district of Thmey in the west of chaotic Phnom Penh. The theatre is built on concrete stilts beneath a thatched roof. The sides of the theatre are exposed to the huge lotus plants that rest on the waters of the Pong Peay. This is a stagnant expanse that carries the weight of much of the neighbourhood's sewage; to Westerners, the first word of the area's name is spot on.

The 130 students at the apsara school range in age from four to 23. A significant number are orphans. Accommodation is provided for them within the school; they practise dance in the morning and study in the afternoon. It's not just the allure of rock'n'roll that is preventing any chance of apsara regaining ground in the popular consciousness. Fire destroyed the National Theatre in 1994. And the University of Fine Arts, where apsara and other traditional dances are taught, was sold off to a property developer last year. The faculty was moved far out of Phnom Penh on a dirt road that is regularly washed away in wet season, a move which has had dire consequences for student numbers.

An additional problem is that to be a lead apsara dancer you must be unmarried and a virgin. When one of the country's best new prospects performed in front of the tourism minister for Cambodia in 2000, he decided to marry her.

"He stole her from us!" claims Metry. Now divorced, Ouk Phalla still dances. But, due to the law of the apsara, can no longer play the lead in ancient stories such as The Churning of the Ocean Milk, which tells how apsara girls were created through a symbolic Brahmanist scripture.

According to myth, the apsara dancers performed in the sky. Their curvaceous figures grace the bas-reliefs of the Angkor Wat temples. The iconic towers of this ancient complex comprise Cambodia's most popular tourist attraction. Angkor Wat was once home to thousands of apsara dancers, who performed for Cambodia's kings during the 12th century, a time when the kingdom covered vast areas of what today is Thailand and Vietnam.

The dancers on the walls of the temples are naked, though dancers today are adorned in silk chorabab skirts and five-pointed crowns with red frangipani flowers sown on to the side with cotton thread to create the effect of a falling stem.

Performances continued in the dancing pavilion of the Royal Palace for moonlight shows until the Khmer Rouge seized power in the mid-Seventies. Pol Pot's murderous thugs began to exterminate anyone who they believed stood in the way of achieving a peasant agrarian utopia. That included the practitioners of apsara.

Anybody with any hint of intellectual merit was slaughtered by order of "Brother Number One", as Pol Pot was known. Judgments were made on terms as spurious as whether a person wore glasses. Veng was a dance instructor who was forced to leave Phnom Penh and work in the fields.

"I had to hide my CV," Veng tells me. "The Khmer Rouge asked me what my job was and I lied and told them I was a farmer. It was only by going into the fields and observing what people did that I didn't get killed. I watched the farming methods that everyone else was using and simply copied whatever they did. Somehow they never noticed that I wasn't a farmer and I avoided death."

After the regime was finally defeated by an invading Vietnamese army, apsara was considered a low priority when it came to rebuilding this most disturbed and abused of societies. It was only in 1995 that the first revived performance was staged, guided by Princess Boppha Devl, a dancer with the royal troupe in the Sixties. She studied the bas-reliefs at Angkor Wat to re-learn the 1,500 positions that masters of the dance must know.

As the light darkens and a post-show dance class ends with the students giggling as they try to maintain their difficult stances, Vang laments the problems of keeping apsara alive.

"It's not getting any easier. We have power cuts almost every day in this part of the city. The government doesn't support us in any way," she says. "We rely entirely on funding from foreign donors.

Culture is not a high priority for the government, which is a shame as this is such an important part of Cambodian history. A lot of the students here are now dancing in the tourist restaurants near Angkor Wat. I would love there to be a day when visitors would mention apsara before they mention Pol Pot. If this is lost, then a part of Cambodia is lost forever."

The writer travelled with Audley Travel (01993 838000; www.audleytravel.com), which offers tailor-made trips to Cambodia reflecting themes including apsara. A 10-day itinerary visiting Siem Reap, Phnom Penh and Sihanoukville costs from £2,045 per person, including return flights from Heathrow, transfers, tours and B&B.

You can buy an offset through Abta's Reduce my Footprint initiative (020-7637 2444; www.reducemyfootprint.travel).

British passport-holders require a visa. These can be obtained on arrival at Phnom Penh and Siem Riep airports or online at www.mfaic.gov.kh; $20 (£11.40).