Angelina Jolie on Religion & the Meaning of Life

Angelina Jolie regards Buddhism as an important part of her son's Cambodian heritage and considers him a Buddhist. She has said, "We spend a lot of time [at our house in Cambodia]. And I’m learning about Buddhism and I’m teaching him what I can. He spent a lot of time in temples with monks and he's learning." {7} 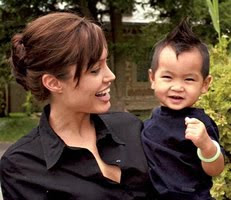 Angelina Jolie (b. 1975) is an American actress known for her exotic beauty, wild-child image, award-winning acting, and more recently, her globe-trotting humanitarian work with refugees, her growing international family, and her high-profile relationship with Brad Pitt. Angelina Jolie was born Angelina Jolie Voight on June 4, 1975 in Los Angeles, California.
Angelina Jolie does not identify herself with any single religion, nor has she declared herself an atheist (contrary to the claims of some atheist websites {5}). The subject of religion has not often come up in her interviews, so her beliefs about such things as God and the afterlife are not well documented.
The most direct statement Jolie is known to have made on the subject was reported by the website A.V. Club (associated with the online magazine The Onion), which asked a number of celebrities the question, "Is there a God?" and published the answers from 52 of them in a September 2000 feature story. Angelina Jolie gave the following answer:

Hmm... For some people. I hope so, for them. For the people who believe in it, I hope so. There doesn't need to be a God for me. There's something in people that's spiritual, that's godlike. I don't feel like doing things just because people say things, but I also don't really know if it's better to just not believe in anything, either. {6}

So at least in 2000, Angelina Jolie had no specific religious beliefs, didn't personally feel the need for a God and disliked authority-based religion, but was not willing to go so far as atheism and expressed hope that there might be a God for the sake of those who dedicate their lives to religious belief.

Angelina Jolie regards Buddhism as an important part of her son's Cambodian heritage and considers him a Buddhist. She has said, "We spend a lot of time [at our house in Cambodia]. And I’m learning about Buddhism and I’m teaching him what I can. He spent a lot of time in temples with monks and he's learning." {7}

Shortly after adopting Maddox, Angelina tattooed a prayer for protection for him on her upper back in Khmer script (left). She said, "I asked for it to be done in Buddhist Sanskrit, which is part of (Maddox's) history." {8}

Some have speculated that Angelina Jolie is now a Buddhist (rumor also has it that Angelina and Brad had a Buddhist marriage ceremony), but she has not indicated a commitment to Buddhism more than any other faith. In fact, she seems to take a United-Nations inspired approach to her family, and perhaps, to her religion. She is reported as saying,

"I have a Buddhist son and I'd like a Christian and a Muslim child, too." {9}

Aside from any particular religion, Angelina Jolie has given a great deal of thought to the meaning of life, something she has been searching for with great intensity since childhood, as well as considerations of morality.

Having first found happiness in acting, and then in her marriage to Billy Bob, Angelina Jolie now finds meaning and contentment in her children and her ongoing work with refugees.

Question: Have you learned any important lessons since you became an ambassador, and if so what are they?
Angelina: I've become a better human being. I've learned the strength of the human spirit. I see different aid workers in camps helping each other from everywhere - people who have come together from all over the world to help people in Africa. It's changed my view of what is important. I'm not so concerned with things I used to be so concerned with. I care now that my son is healthy. I feel that I'm of some use to other people in the world. {10}


I've been traveling for the last three years and the last two I've been goodwill ambassador. I initially set out because I wanted to learn about what’s going on in the world and wanted to become a better person and simply educate myself. When I found I could be useful in communicating what I had learned and maybe inspire other people to educate themselves and do some good, it made me so happy and gave me a sense of purpose.
I’ve learned more about life from refugees and people that are the survivors from around the world than anywhere else. I admire them. I’ve learned about family and just respect them so much and have seen so many horrible things and seen so much survival and so much beauty in these people. So they’ve changed my life and I hope to keep working with them and do what I can to raise awareness. {12}

I want to fill my mind with valid issues in the world. I'd like there to be less refugees. I'd like all girls to go to school. That's what we need to be thinking about, and working on making our own families good and strong and our own kids happy. Not to cloud our minds with things that don't matter." {13}

"I've been crazy in my life, and I've been wild in my life, I've never been a bad person. I've never intentionally hurt other people just to hurt them. And I'm trying to do a lot of good things with my life." {14}

I love films, but I'm more aware of being a parent now and I'm more aware of the world now. I spend as much time as I can in a day trying to educate myself and travel whenever I possibly can. I'm grateful to be able to live in both. It's increasingly harder to come back into a world that is focused on material possessions...when you've just spent time doing something you feel is much more important. {15}

To read full article, please go to this link: http://www.religionfacts.com/celebrities/angelina_jolie.htm
Posted by Leadership at 12/10/2010 01:21:00 PM