Study suggests chances of landing a job better if your name is Smith, not Singh 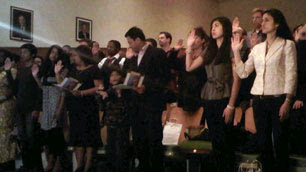 Over 50 people stand up to take the Oath of Citizenship in Ottawa..

Canada's officially a multicultural society and visible minorities are increasingly present in politics, academia, big business and the media.

So a survey that suggests your chances of landing a job are better if you have an English-sounding name comes as something of a surprise.

A study for federally funded Metropolis B.C., which researches immigration and diversity issues, found that resumes with English-sounding names received 35 per cent more callbacks than those whose applicants had Chinese or South Asian names, despite having identical qualifications.

Researchers sent out several thousand resumes of job applicants with identical experience to online job sites to gauge the response of would-be employers. Only the names were changed.

Recruiters in Toronto and Montreal were 45 per cent more likely to call Alison Johnson over Min Liu, while the number in Vancouver was 20 per cent.

"The name draws unconditional stereotypes, no matter what else is on the resumé," researcher Philip Oreopoulos, a University of Toronto professor, told the Star.

The study concluded employers were prompted by fears applicants with non-English names would have language troubles.

The study was probing why highly qualified immigrants still have trouble moving past the low-paying, entry-level work many must settle for after winning landed-immigrant status.

"A lot of our immigrants are let in based on a desire for them to assimilate into the high-skill labour market, but it's just not happening," Oreopoulos said.

The research team sent out resumes in response to ads for office jobs requiring a bachelor's degree and four to six years of work experience.

The study found employers likely to overlook those with non-English names even if the applicants stated their language skills and noted their experience was with Canadian universities and jobs.

Oreopoulos said researchers did followup interviews with recruiters - at least the few willing to participate - and found that language and social skills were the main concerns.

Oreopoulos said it appears the discrimination seems to be subconscious rather than active. With little time to sift through applications, recruiters tend to pigeon-hole those with non-English names even if the resume includes information that would remove any questions about language or social skills.

One solution, he said, would be for employers to blank out the names of applicants to ensure the best-qualified prospects are interviewed.

"It's an easy thing to try out to see if hires actually improve from doing so," he said.