Building political ownership and technical leadership Decision-making, political economy and knowledge use in the health sector in Cambodia

Building political ownership and technical leadership Decision-making, political economy and knowledge use in the health sector in Cambodia 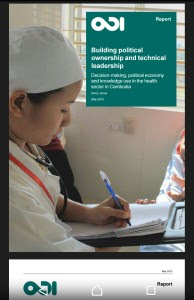 Based on the findings of the study, the following recommendations can be made for AusAID Cambodia and other international development agencies engaging in the health sector in the country.
6.1 Recommendations for the next phase of programming
At the time of writing, it seems likely that HSSP II will be extended by one year, with the start of 2015 most likely to be the starting point of the next phase of AusAID support to the sector (Pearson, 2012). The following recommendations represent principles and ideas which could help guide the overall approach for this next phase of programming.
6.1.1 Politically savvy programming
1. Effective support for Cambodia’s health sector may involve designing elements of programmes to ‘go with the grain’ of political economy dynamics. This has the potential to have a high impact on health outcomes.
a. Attempting to work with the trend of mass patronage, by encouraging health to be seen as an appropriate ‘gift’ to constituents (e.g. disbursing vaccinations, dietary supplements, medicines), would be likely to garner the required behind-the-scenes approvals and ownership which could see broad, fast and effective roll-out with minimal leakage.
b. This could involve providing funding and/or in-kind resources for relatively top-down, one-off solutions to certain problems – for example, vaccinations, bed nets, or nutritional supplements. Key local government actors (and possibly CPP working groups) should be engaged, and it would be important that there were space for government and/or CPP to claim some credit for handouts. The issues of branding and publicity would need to be carefully considered.
c. Patronage-based distribution helps trickle down resources and allow for services to reach local people to some extent; yet it is far from being systematic and equitable. Complementary activities could be carried out to compensate for the downsides of mass patronage. One important priority would be public education and awareness to make the demand for health services better informed. Mitigation should be made for areas which are under-prioritised by the patronage system, for example through ensuring that NGOs focus service delivery on areas with low political priority.
d. Programmes could limit downsides through making gifts selectively available – for example, on issues where citizen demand is more likely to coincide with good medical advice, and by making the volume of gifts available proportional to the burden of disease or magnitude of the problem.
e. IDPs may want to limit their exposure to risk in such a programme through focusing on impact. Although it may often involve a ‘second best’ response to problems, the nature of handouts means they are suitable for conducting highly rigorous impact evaluations, which would establish improvement in health outcomes attributable to the programme, with a high level of certainty. Full randomised control trials are unlikely to be possible given the (required) lack of control over disbursement; however a variety of quasi-experimental methods should still be able to establish the value of the programme beyond reasonable doubt.
2. It should be recognised that medium- to long-term prospects for sustainability and effectiveness in the sector hinge on whether greater political ownership by the Cambodian government(15) can be built over health service delivery.
a. IDPs should formulate a basic theory of change and some principles and assumptions relevant to Cambodian context about how political ownership can be built in the sector. From that, they should identify strategic entry points or issues on which it is acceptable for them to work, or where their programmes can in some way contribute to health sector programming.